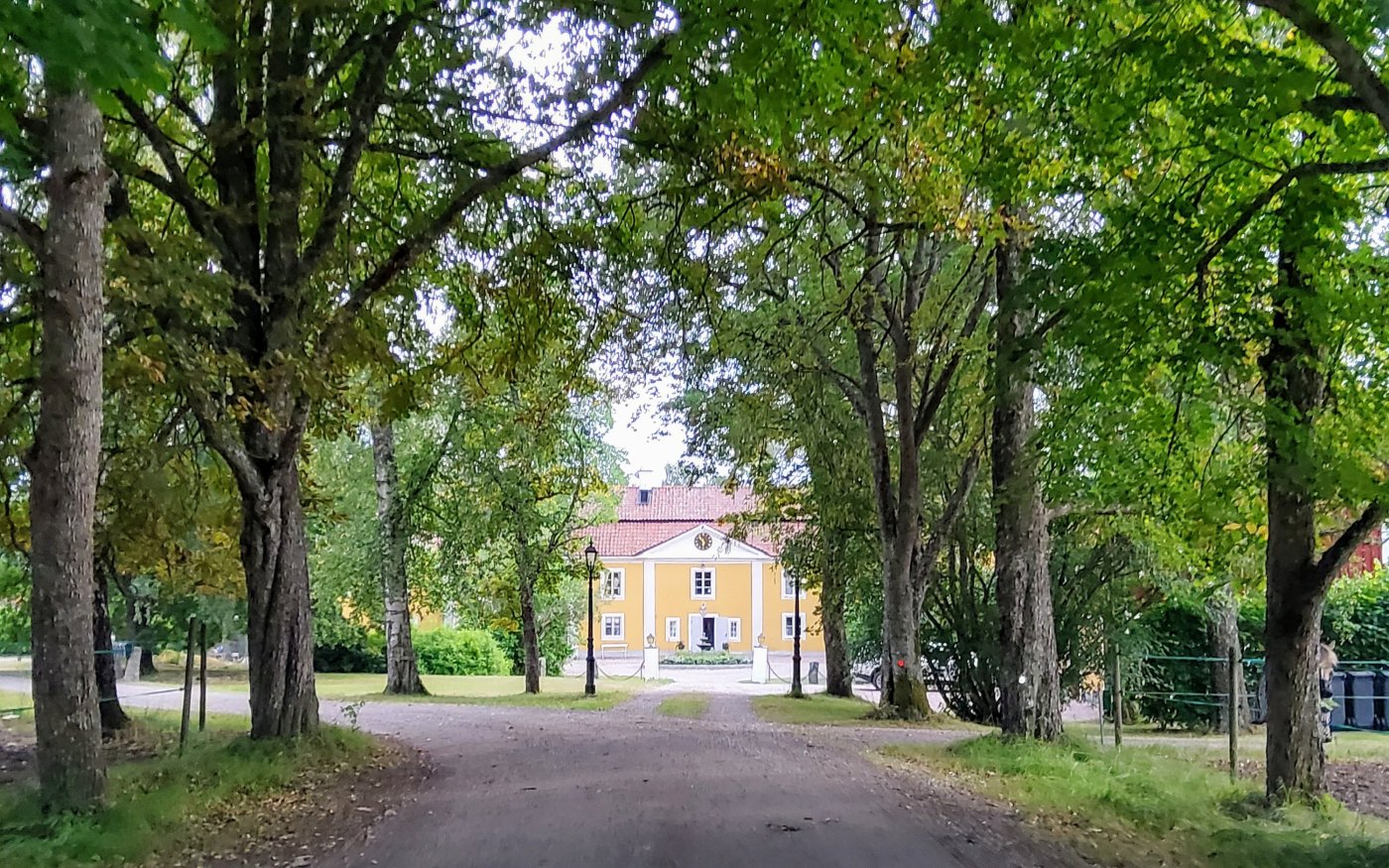 Following the trace of family members from generations ago can be a very interesting and rewarding pastime. Research is often very time consuming and requires a lot of patience, but sometimes you get those fast rewards – and that is an exhilarating feeling!

I had one of those moments this summer.
After a vacation with my family on an island off the south-east coast of Sweden we didn’t feel like taking the same route back as the one we came down.
Through earlier research and information from new family connections, I knew there were some family-related locations to see if we took a bit of a detour instead of driving straight home.

My great grandfather Robert‘s father Wilhelm, was a smith at a large estate in the 1800’s. It still exists as Forsa Bruk (formerly spelled Forssa) and that is were Robert grew up. He had several siblings, some of whom also became smiths at that same estate. Robert himself, became a missionary in China as those of you following this blog already know.

Robert’s father Wilhelm Bergling was one of the men who was part of the new awakening to Christianity that swept through Sweden during the 1800’s. Wilhelm (sometimes also spelled Vilhelm) got caught up in these new thoughts of religion being something for the indivdual, possible to practice outside of the church and in accordance with one’s personal experiences. He started the first little congreation standing free from the Swedish Church at Forsa Bruk. At the time, the estate was managed by the Indebetous – a noble family originally from the Netherlands.

Wilhelm started the congregation sometime in the 1860’s and soon got in touch with Evangeliska Fosterlandsstiftelsen (EFS), which had formed in 1856. EFS was close to the Swedish state church – many of the priests were amongst those “awoken” to this new way of being a Christian. A big part of this was to be missionaries and bring more people to Christianity.

This set off a new chapter in the history of the Bergling family, which so far consisted of a long line of master smiths.

In order to have somewhere to meet and pray together, Wilhelm (and probably some others) organised a small mission house close to a bend in the creek at Forsa Bruk (Spiksmedjesjön).

A cousin of my late father told me the small missionhouse should still be there somewhere, but he didn’t know how to find it.

Thus, my expectations for what could be found were not very high – anything would be good!

The weather was ever changing between rain and sunshine whilst we were driving up through Sweden. When we reached Forsa Bruk, late in the afternoon, the final rays of sun were shining and the estate showed itself from it’s most favourable side.

The buildings were yellow with white windowframes. One part of the estate lay beautifully on one side of the creek, surrounded by green lawns and a dam full of water lily leaves. Driving over a new wooden bridge decorated with beautiful flower pots, we found the other part of the estate – a little less taken care of, but still charming and in the same yellow color.

A bit further down the dirt road, we saw a man with a dog walking towards us. Stopping the car, I ventured to ask him about the estate. Did he perhaps know anything about the mission house or the forge where the smiths worked?
He didn’t know anything about a mission house, but could point us in the direction of the ruins of the former stone building that housed the hammer- and nailsmiths back then.

– You have to put your car close to the barn over there, and walk through the bushes along the creek until you see some large stone structures – that’s where it was, now all in ruins though, he said.

It was quite interesting to see the remains of the forge. It must have been very big, and one could see how they had made use of the water – that was led down from the upper dam in a very organised manner.

I could imagine the sounds of the smiths’ hammers against the steel, mixing with the constant waterflow of the creek.

We then set off to look at the cemetery close by, as I had found our family name online on a grave that was supposed to be there. But before that, my husband wanted to go a bit further down the creek – to see what it looked like.

Said and done, we were very surprised to see a small red, wooden house close to the road with a blue and white sign on it – “Mission house” it said.

Could this be it?

We could see someone in the house and thought we might just stop and see if they could tell us if our suspicion was correct.

When I knocked on the window a man appeared in the doorway. He confirmed this was the actual misssion house and showed me some information he had in his phone photo gallery, telling about an “A.V. Bergling,” who had once started a small congregation that met in this very house.

Peter and his wife Birgit, had saved the house from mould and redone the interior so that it now contained a small kitchen and a bedroom/livingroom complete with a fire place. The outside was still the same as when the house was first built.

It was simply amazing to see – they had done such a lovely job preserving it, and were very hospitable in telling us what they knew about it’s history.

They had also had the small sign manufactured in Prague and put up on the side of the house. Such luck they did that – otherwise we could never have guessed this was the place!

From a text Peter showed us about the house, we gathered that my great great grandfather had endured a lot of mockery due to his newly found faith, but he had kept going and even started inviting preachers to come to the mission house.

Thank you so much, Peter and Birgit, for being so hospitable and sharing this information!

But this road trip was not ending here – now time had come to the cemetery in Östra Vingåker. The sun had now finally disappeared, and the rain was starting to make itself noticed for real.

When we arrived at the church, the trees in front of the cemetery provided some kind of shelter, but not knowing where to start looking for the graves it felt like this was just a little too much.
I decided it would just be a quick look around – the cemetery was pretty big and the rain was getting heavier.

I went around the church and found some quite impressive grave stones belonging to the Indebetous – and that’s when I knew the chance of finding my relatives there as well was pretty high.

Looking at some of the stones that had an older feel to them, I finally found the one grave I had not expected to find – the one of A.V. Bergling, his wife and three of his daughters!

I was searching for another stone altogether. I didn’t find that one, but this one was much more exciting.

Imagine what a small round trip – all in a couple of hours – managed to add to my research into family history. So nice to have that fast reward once in a while!

11 thoughts on “Exploring the past in the present”